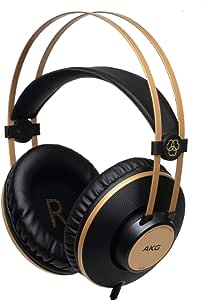 Our K92 headphones deliver an authoritative, extended low-frequency response that gives definition to kick drums and bass guitars. At the same time, the detailed yet precisely balanced high-frequency response reveals the nuance in vocals, guitars and acoustic instruments. The K92's generous 40mm drivers deliver the highest sensitivity and widest frequency response of the K52 and K72 - resulting in powerful output that reveals every detail. The K92s also feature a low-impedance design for compatibility with a broad range of playback devices, from professional studio gear to portable music players. The K92 headphones' closed-back design eliminates audio leakage and delivers sound to your ears only. The mic won't pick up the sound of the click track in your headphones - and you'll always be able to mix and master peacefully without being distracted by outside noise. This exceptional level of audio isolation is due to a new acoustic chamber, which sits between the ear cup and the hinge that connects to the headband. Our innovative design gives you the freedom to move your head in any direction without letting sound in or out. With the K92, you'll enjoy a private workspace, no matter where you choose to create. Getting the perfect mix sometimes means monitoring track levels for hours. We designed our unique self-adjusting headband to automatically create the perfect fit for every band member. No need to mess with delicate sizing mechanisms, which have the potential to break over time. The exposed headband design keeps the K92 headphones comfortably light without compromising driver size. Breathable, lightweight ear pads encircle your ears, rather than putting pressure on them. The golden accents emphasize the high level of quality and create a stylish appeal. Audio frequency bandwidth: 16 - 22000 Hz. Sensitivity headphones: 113 dB SPL/V. Rated impedance: 32 Ohms. Cable length: 3 metres. Maximum input power: 200 mW.

gjbmcn2
4.0 out of 5 stars What I wanted at a Price I could Afford Comfortable OVER EAR
Reviewed in Australia on 21 March 2020
Verified Purchase
I bought these because I was slightly nostalgic for my carefree and comfortable over the ear comfortable chair fall asleep listening days at at my old university's Student Union listening room record bar AND I needed to get a pair I can wear comfortably, sounded OK and did not disturb or disturb others now that I am much much older and far from carefree (especially financially).

I looked at the K52,72 and K92 reviews and it seemed these were the best of value for money from AKG fleet. I also had my eyes on the Phillips Philips SHP9500 after Zeos Reviews but the price wasn't in the range.
Listening they are comfortable and will get more so, they do get the "do not disturb" tick but the sound .....could be better there's a plasticky echoing from being closed back and not having enough rigidity or dampening to the cups. I would compare them to the sound quality of Sennheiser HD451's that come in at roughly the same price.

As an update i’ve started using a Audioquest Dragonfly Black AND a small FIIO headphone Kilimanjaro 2 amplifier AND it has made a BIG positive difference to the quality of the headphones sound. It’s bigger less harsh richer sound

musotto
5.0 out of 5 stars Awesome Value
Reviewed in Australia on 19 April 2020
Verified Purchase
I have no shortage of good to excellent headphones, with ones like my Sennheiser HD580 (which I've owned for twenty years or more). This AKG K92 set has got to be one of the best value over-ear headphones around. I trawled the internet for reviews of low-to-moderate price headphones to keep with the music listening setup at a holiday house I frequent. The model below the '92' (the '72') gets excellent reviews (as does the '52'). With the K92 you get the very attractive gold headband and trim, which, for me, enhances my experiences of owning and using them. The sound? Amazing at this price point. plays very clear even at very high sound pressure levels. Probably impossible to even do as well, let alone better, at this price point.
Read more
One person found this helpful
Helpful
Comment Report abuse

Abolition of Man
5.0 out of 5 stars Great pair of over ears
Reviewed in Australia on 1 July 2020
Verified Purchase
I needed a cheap pair of over-ear headphones primarily to use with my guitar modeller (POD HD500x), my electric drum kit (Roland TD-1kv) as well as record and listen to music. If you're looking for bass-laden headphones, these are not for you. Because they are studio headphones, they're more appropriate for making music or playing it. They also work great for audiobooks and spoken word type stuff. I am pleasantly surprised what you get for the price.
Read more
Helpful
Comment Report abuse

Igor Barinov
5.0 out of 5 stars Amazingly accurate sound, unbeatable price/brand
Reviewed in Australia on 7 February 2020
Verified Purchase
I like the balanced clean sound, lightweight construction and just the simplicity of it.
Read more
Helpful
Comment Report abuse
See all reviews

Amazon Customer
1.0 out of 5 stars My Worst experience with amazon and headphones
Reviewed in India on 20 January 2019
Verified Purchase
The right side stopped working after just 10 days I bought it, as a result could not even replace the product. Amazon service was pathetic, the delivery person canceled my order after 2 missed calls (5 minutes) even though I paid extra for 1 day delivery.
Customer service for the headphone also has been pathetic. I am in Pune and there are no service centers; I have to spend more money now to courier this product to their service center. Buying this was a mistake. Such a nice headphone but poor durability. Even the cheapest earphones last longer. I saw many people having the same issue - Right side stops working after some time, but I didn't think it would be 10 days. Now I'm literally stuck with a 5K purchase which is unusable after just 10 days.

Badger
5.0 out of 5 stars Light, comfortable with a great sound
Reviewed in the United Kingdom on 25 January 2020
Verified Purchase
Been using these for months now and still highly satisfied with the sound quality. They are very light and comfortable to wear for long periods and the very generous cable length allows you to be well away from the sound source. Some have complained about all this cable getting in the way. I just coil the excess and hold together with a couple of wire ties. Simples!
Use them with a very basic tablet streaming Tidal and Spotify as well as a high end hifi system playing vinyl and they deliver a very decent sound stage on both.

A.S.
5.0 out of 5 stars Very nice sound, very good value for money
Reviewed in the United Kingdom on 13 January 2020
Verified Purchase
I am very satisfied. The sound is slightly boxy, but overall, it is also open an natural, and not tiring. The headphones are very light and comfortable.
Read more
One person found this helpful
Report abuse

Kindle Customer
5.0 out of 5 stars Punch way above their weight
Reviewed in Canada on 17 November 2019
Verified Purchase
After trying ridiculously expensive options (P9 Signature) and everything beneath it, bought these almost on a "Well might as well try them" whim. They sound way better than the much more expensive Focal Listen Pro (all treble, no bass), the whole Audio-Technca range of M20x/M30x/M40x/M50x/M70x (ranging from unrefined to baseless), Sennheiser HD630VB, and many, many others.

They're easy to drive (unlike the misadvertised Beyerdynamic DT 770 Pro 32 ohm, the AKG K92 really can be powered straight out of a phone or mp3 player).

The sound is balanced and refined. Bass can range from thumping head pounding bass to just right, depending on the recording.
Mids (vocals) aren't the best. They sound ok. But nothing to focus on nor complain about.
Treble is scintillating, clear, and never harsh (My ears still carry scars from the ear piercing assault of the AKG K550, Audio-Technica ATH-MSR7 and Sony MDR-1A).

Soundstage, althought it will never be confused with a speaker set up, is decently out of head to allow useful instrument separation, while being simultaneously full and weighty to be enjoyable.

Maluma/Reik's reggaeton beats are deep, and thumping with vocals perfectly audible so that each word is clearly articulated.

The bass on Manu Militari's Tout est dit or Michael Jackson's Billie Jean pounds so hard, you can feel the drivers moving and tingling on your neck. But synths and vocals are crisp and clear.

Wolfgang Sawallisch and The Philadelphia Orchestra's rendition of Bach-Stokowski' Toccata & Fugue starts with shimmering violins and is followed by deep, weighty celli & basses, all rendered without distortion, full of body, like in a concert hall.

José Carreras at top range doesn't distort, rather he paradoxically floats above *and* blends in with the orchestra . Even sometimes-shrill screaming Céline Dion's vocal endeavours don't shatter your ears, but rather become a cohesive part of the mix.

Sabaton's Primo Victoria sounds so good, you just want to crank it up: all the guitar lines are clear, the bass is mighty, and its perfectly blended together. Holy moly, the K92 are now my favourite cans for heavy metal.

The AKG K92 is one of the most underrated gems in the world of headphones.

Aman Khandelwal
5.0 out of 5 stars Using them from around 3 Months. Fully Satisfied.
Reviewed in India on 13 September 2019
Verified Purchase
I have an Audio Technica ATH-M20x and I also have these AKG K92, undoubtedly, the AKGs are the better between the two. ATH-M20x costs you around 200-300 bucks more, and you would also find many pages and reviewers praise the AT's M20x, but if you trust me, the AKG's K92 are simply better, and alot more transparent and flat, which is the ultimate goal of any music producer or mixing engineer. Moreover, before buying any studio monitoring headphones, you should also give attention to how much comfortable a pair of headphones is; as production and mixing sessions can easily be several hours long, and if the headphone wouldn't fit you well or would be not so comfortable, your sessions would be affected.
But these AKGs are most comfortable pairs of studio headphones you will find in the market, that to at this price point. They will painlessly fit even the largest of the human ears, they are extremely lightweight, and they will fit you just perfectly covering your ears.
In addition to this, the cable/wire is sturdy and good in quality. You even get a high quality 3.5mm to 1/4inch jack converter.
In all, these are the best studio reference headphones you get at this price-point.
Fully Satisfied.
Read more
12 people found this helpful
Report abuse
See all reviews
Get FREE delivery with Amazon Prime
Prime members enjoy FREE Delivery and exclusive access to movies, TV shows, music, Kindle e-books, Twitch Prime, and more.
> Get Started
Back to top
Get to Know Us
Make Money with Us
Let Us Help You
And don't forget:
© 1996-2020, Amazon.com, Inc. or its affiliates