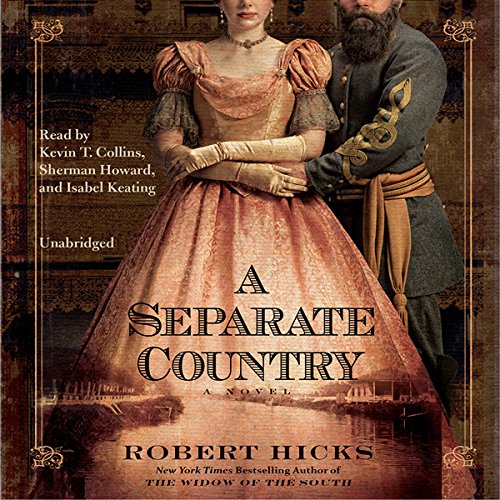 MONIQUE ROULEAU
2.0 out of 5 stars A SEPARATE COUNTRY
Reviewed in Canada on 25 January 2013
Verified Purchase
AFTER READING ROBERT'S "THE WIDOW OF THE SOUTH"; THIS SECOND EFFORT WAS A BIG DISSAPONTMENT.
THIS ONE WAS DEPRESSING BECAUSE OF IT'S DISFUNCTIONAL PROTAGONIST.
I WAS SO TAKEN BY "WIDOW OF THE SOUTH" THAT I PASSED IT TO SEVERAL FRIENDS AND FAMILY,
EACH TIME I COULDN'T SPEAK OF THE STORY WITHOUT TEARING UP; THAT HOW MOVING IT WAS.
I READ TO FEEL EMOTION;"A SEPARATE COUNTRY" EVOKED NO SUCH FEELINGS.
MONIQUE ROULEAU
Read more
Report abuse

R Owens
5.0 out of 5 stars Truth, Consequences, BOTH!
Reviewed in the United States on 7 January 2010
Verified Purchase
A Separate Country was all about the consequences of war--psychologically, physically and as a group. General Hood was moved from being the arrogant, bull-headed warrior into the broken, humiliated shell of a man whose only glory was his wife.

As in Widow of the South, my emotions were moved to the point of almost quitting the book. As a Southern woman and great-greatgranddaughter of Captain John Ritter,CSA, this book seemed almost personal to me and mine. Every high-school student should add these Robert Hicks books to his/her required reading and hope this is the closest they'll ever come to war in America. God bless America.

The only shortcoming of A Separate Country is that I would REALLY like to know which parts are true and which fiction. It pains me to wonder if Hood's 10 children were, in fact, separated intentionally as pawns to gain money and publicity for Hood's old compatriots and their schemes.
Read more
3 people found this helpful
Report abuse

Jim Duggins, Ph.D.
4.0 out of 5 stars New Orleans Upside Your Head
Reviewed in the United States on 10 March 2010
Verified Purchase
Robert Hicks's novel "A Separate Country" is a big book, big in physical size and huge in scope. This is the story of a Confederate States' General John Bell Hood, who for his maniacal killer instincts is one of the most infamous military officers of all times. General Hood, seemingly controlled by a "win at any cost" ruthlessness cost the lives of thousands of his troops and savaged his opponents with tactics outlawed by civilized nations. The beginning chapters of this novel present those unsavory practices of General Hood as an officer, wiping out Commanches in the southwest as well as in civil war battles for the Confederate States.

The general is well aware of his shallow pride and says, "I live, others die. I had not been courageous in battle, I was not gallant. I had been inhuman, despicable, brutal in my insensate way." But nothing he has seen and done in the war is as strong as the thousands dying from the annual plagues of Yellow Jack, Cholera, and malaria in New Orleans.

Much of "A Separate Country" is spent with this hero of the beaten south in reconstruction. General Hood courts and marries Anna Marie Hennan, an upper-middle class Creole Belle. After several false starts, the couple, basking in her family wealth and his revered patriotism on the side of the losing CSA, begin a life in New Orleans which his business incompetence squanders leaving them only their eleven children to share their penury.

Author Hicks provides an inside view of tha wondrous 19th century citadel that was New Orleans, that great multicultural, multilingual, multiracial, Indian, Creole, French, Spanish, Euro city -- to the heart and soul of all that is and was its gustiness about death and dying and, more, killing.

Hicks' prose is often lyrical, e.g., his description of NO crowds, then and now, e.g., "New Orleans was a city of crowds --- a city that yanked people along from spectacle to spectacle ... twisted-up maze of beatings, amusement, intrigue, prayer, politics, greed, and charity. Folks formed up around Old Creole men arguing the hows and wherefores of a revolt as if they could; they formed up around drunken Americains asleep with the pigs; also around a young bride presenting her first child to the world; around the old Creole couple who were torturing their negro servants in violation of the code; around men picking out bawdy tunes on hollowed boxes strung with wire; around the Italian vegetable hawkers; around a young man choked dead in an alley off Dumaine, the dull black bruise of the garrote around his neck as if it had been delicately drawn on his skin, a tattoo."

I dare you to read Robert Hicks's "A Separate Country" and finish unchanged, but it's not the fictionalized portrait that will grab you. I think what will get to you is the profound grasp of the historical underpinnings that seeded this miraculous place, the "only in America" city of New Orleans.
Read more
3 people found this helpful
Report abuse

Teresa F. Kant
5.0 out of 5 stars Both books in this series are excellent!
Reviewed in the United States on 29 October 2014
Verified Purchase
This book was fabulous!!! A bit depressing, but even though I am a history buff I never gave a moment's thought as to how being a general in a war would effect the rest of your life! We hear so much about post traumatic stress disorder in soldiers. I think the commanders have been overlooked. But they have soooo much blood on their hands!

This book is the second in the series. You need to read Widow of the South first. Neither book is 'about' the Civil War. They are both about the people in the war. A Separate Country is about the afttermath of the war and John Bell Hood's family. Both books in this series are excellent!
Read more
One person found this helpful
Report abuse
See all reviews
Back to top
Get to Know Us
Make Money with Us
Let Us Help You
And don't forget:
© 1996-2021, Amazon.com, Inc. or its affiliates