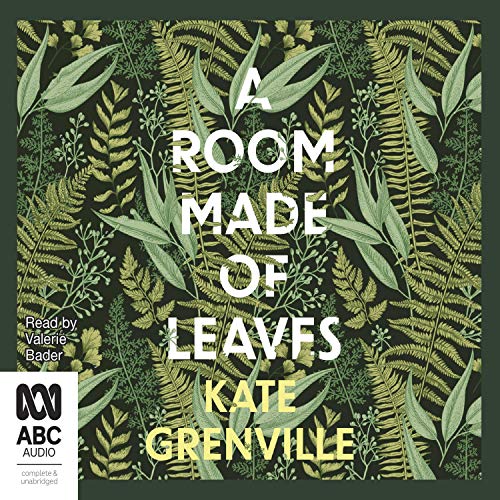 A Room Made of Leaves

4.2 out of 5 stars
4.2 out of 5
2,084 global ratings
How are ratings calculated?
To calculate the overall star rating and percentage breakdown by star, we don’t use a simple average. Instead, our system considers things like how recent a review is and if the reviewer bought the item on Amazon. It also analyses reviews to verify trustworthiness.

rodney pyne
5.0 out of 5 stars Our intriguing past
Reviewed in Australia on 12 August 2020
Verified Purchase
Kate Grenville is a great story-teller. She shows how well she understands what our country was like 200 years ago. The story is well-paced and the characters credible. This is a work of some fiction,structured around the real history of the Macarthurs. I was surprised that she didn't acknowledge any debt to Michelle Scott Tucker's "Elizabeth Macarthur : A Life at the Edge of the World",published back in 2018. Grenville's Elizabeth Macarthur is different from Tucker's,being more of an imaginative composite. Tucker's is the real person and I would say is the better story. Still,as a piece of creative writing,Grenville's novel is well worth the 5 star rating.
Read more
7 people found this helpful
Helpful
Report abuse

john bateman
5.0 out of 5 stars A book for our time
Reviewed in Australia on 21 August 2020
Verified Purchase
This book of Kate Grenville addresses the big question of our time.that is how to acknowledge the complete history of our wonderful time. I feel vindicated in the opinion I have had of John MacArthur since I immersed myself in Australian history in my early teens some 50 or more years ago. I was most touched by the passages where Elizabeth feels herself accept this foreign land as her home.
Read more
3 people found this helpful
Helpful
Report abuse

michelle mcdonald
2.0 out of 5 stars Grenville writes Elizabeth Macarthur as a Mills & Boon heroine
Reviewed in Australia on 28 September 2020
Verified Purchase
First let me say that I have always enjoyed Kate Grenville's books and looked forward to reading this one.
I did enjoy the first few chapters, about Elizabeth's childhood. Grenville's prose style is beautiful. However, I think of all her books, this is the least successful although it's certainly an easy read and reasonably entertaining.
For me, Grenville's portrayal of the characters was a bit one-dimensional. None of them rang true. Mrs Macarthur and her husband were almost caricatures. Elizabeth was too good to be true - although history does portray her as a woman of intelligence, diligence, grace and VIRTUE. History shows her husband as argumentative, irascible and difficult to like. However, in this book he had no redeeming qualities at all. The secondary characters also came across as 'types' rather than believable human beings.
History shows that even though Macarthur was away for some time and Elizabeth was left in charge, he was an astute businessman and his letters to her show his considerable interest and control of the breeding and marketing of fine wool. There is no doubt that she also played an equally, if not more important part, but his role cannot be discounted. This book seems to want to do just that.
If you are going to write a fictional, historical biographical romance, and this book is total fiction - there were no letters - why would you choose a woman who is well known in Australian history and turn her into an 18th century Mills & Boon heroine.
History tells us that Elizabeth and Dawes were friends, but she was also a particular friend of Governor Philip. There is nothing to say that they were lovers. And in the tiny Colony that was Sydney in the 1790s, it would have been virtually impossible for someone as well known as Elizabeth Macarthur to have such a full-on affair - even a small flirtation would have been noticed I would imagine.
I think Grenville has done Mrs Macarthur a disservice. This to me was popular fiction and I think it would have worked well as just that, if it had been about a fictional heroine.
Read more
2 people found this helpful
Helpful
Report abuse

Rebecca Davies
4.0 out of 5 stars Enlightening
Reviewed in Australia on 11 July 2020
Verified Purchase
This novel about Elizabeth MacArthur brings her out of the shadow of her husband who doesn’t come out well in this story. It is also a novel of today with welcome focus of the displacement of indigenous people at the first European settlement in Sydney and Parramatta.
Read more
2 people found this helpful
Helpful
Report abuse

MargMARM
3.0 out of 5 stars Both interesting and irritating
Reviewed in Australia on 27 September 2020
Verified Purchase
Grenville has done an interesting thing with this book. She has attempted to give voice to an historical figure, arguably a neglected one, Elizabeth Macarthur. In doing so she is sympathetic to the situation Mrs Macarthur finds herself in - married to a cantankerous egocentric man, in the struggling colony of Sydney.
While much of the narrative draws a clear picture of life in Sydney, the most atmospheric parts are in the sea journey half way across the world.
Grenville's writing imbues Mrs Macarthur with modern feminist sensibilities, while capturing the challenges of life for a woman of her time. I did find the inconsistencies in the main character irritating - more so because of the use of the first person narrative style. She explains away these inconsistencies quite glibly - Eliza's husband reads her letters - but fails to really appreciate the life of privilege she has in the town.
Granville makes no claim to the story being accurate and admits to being "slippery" with the truth. However she does weave facts in and out of the narrative - especially about treatment of aboriginal people, but her melding of several governors and officials into one, and her glossing over of some important historical events is what grates.
As a novel it is entertaining enough, but rather less substantial than others by the same author.
Read more
One person found this helpful
Helpful
Report abuse

Suzanne J
TOP 500 REVIEWER
5.0 out of 5 stars Excellent
Reviewed in Australia on 30 July 2020
Verified Purchase
A very satisfying read. Subtle yet powerful. A simple yet fully developed tale of a woman's struggles and personal triumphs, told with a modesty that is convincing of the woman that might have been.
Read more
2 people found this helpful
Helpful
Report abuse

Deedee
5.0 out of 5 stars I loved this book.
Reviewed in Australia on 17 August 2020
Verified Purchase
So beautifully written, it carries you from Devon to Sydney's earliest settlement & the familiar names of its settlers. It made me able to imagine just what it might have been like, for a woman living in the late eighteenth & early nineteenth centuries in polite society but tempered by the fact that it was in the new & rough colony of NSW.
In reading this account of Elizabeth Maccarthur's life, it has made me want to know more about Australia's earliest colonists and what they achieved.
Read more
2 people found this helpful
Helpful
Report abuse

Alison S
5.0 out of 5 stars Engaging and insightful
Reviewed in Australia on 24 September 2020
Verified Purchase
This tale of the little known Mrs McArthur gives an interesting and intelligent voice to a strong woman behind the famous man. Her double life is fascinating and gives insight into how so many women had to perform to survive loveless marriage and harsh environments. It provides a different perspective on the early settlement of Australia by the British and paints the life of a remarkable woman.
Read more
Helpful
Report abuse
See all reviews

AmazonCustomer
3.0 out of 5 stars Spoilers are Contained within this Review.
Reviewed in the United Kingdom on 17 November 2020
Verified Purchase
**Spoilers**
I purchased this book with the notion that I would be reading a fictional story, this meant I was met with surprise when I read at the beginning the editor’s note which described the findings of Elizabeth’s story within a roof cavity and this book would be her story, her words. This thrilled me immediately, and I devoured the book intently. I felt as though I was living through her, I had traveled back in time to this unknown land and all of a sudden history was been stitched together in front of me. However, upon reading the authors notes at the end of the book I discovered that in fact the story that I had just read was actual fiction and the editors notes at the beginning where in fact false. The world of Elizabeth that I had created to exist in apart of my brain that was so rich and full of vivid beauty and truth was all of a sudden covered in a dark mist, I know I sound dramatic but it feels fraudulent to some degree. Maybe I’m the fool for believing too quickly.
Read more
17 people found this helpful
Report abuse

Madeleine C-W
4.0 out of 5 stars An Engrossing and Enjoyable Read.
Reviewed in the United Kingdom on 5 September 2020
Verified Purchase
Having returned from a three week holiday in Australia just before lockdown ; Sydney (with its Rocks area, being our final stop) I was intrigued by its early history, so reread Sarah Dane by Catherine Gaskin a novel about a female convict and A Room Made of Leaves sounded interesting in depicting the cicumstances in which Elizabeth McArthur from a small Devon village became a free settler on the second fleet to the penal colony in New South Wales; this was my first introduction to this author and I thoroughly enjoyed her take/perception on the character and the conditions of her life both in Devon and NSW.
Read more
11 people found this helpful
Report abuse

Becher
3.0 out of 5 stars Great story
Reviewed in the United Kingdom on 26 December 2020
Verified Purchase
I enjoyed the start the characters but it suddenly changed. We are told she has more children but nothing of what happened to them. He goes mad and believes she is unfaithful no why or how. The end is rushed unclear. As is the means to the perfect sheep. All alluded to but not concluded
Read more
2 people found this helpful
Report abuse

Molewife
4.0 out of 5 stars Worth Reading
Reviewed in the United Kingdom on 27 June 2021
Verified Purchase
I really enjoyed this. No idea what it would be about. Just liked the cover. Intrigued by back cover synopsis. Excellent story of one woman’s feisty survival of ghastly enforced marriage to awful man in 19th century resulting in emigration to NSW. Amazing resilience in face of adversity. Well written & astutely funny .
Read more
One person found this helpful
Report abuse

Labecque
5.0 out of 5 stars An inventive story based on true facts
Reviewed in the United Kingdom on 19 August 2021
Verified Purchase
Using letters and other documents about Elizabeth Macarthur and her husband, early settlers near Sydney, Australia, Grenville weaves a fascinating story about their voyage to NSW with a boatload of convicts for company and their eventual farming and sheep ranching . Macarthur was known as the sheep king of Australia but the success of the venture was largely due to Elizabeth's managerial skills. Macarthur was a quarrelsome, difficult man whose ambitions far exceeded his talents and abilities. This is the story behind the facade of public facts.
Read more
Report abuse
See all reviews
Back to top
Get to Know Us
Make Money with Us
Let Us Help You
And don't forget:
© 1996-2021, Amazon.com, Inc. or its affiliates