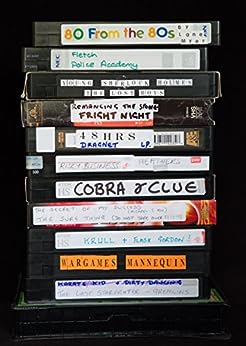 80 From the 80s Kindle Edition

DSP
3.0 out of 5 stars A wobbly trip down memory lane
Reviewed in the United Kingdom on 5 March 2018
Verified Purchase
This is something of a curate's egg - that is to say, good in parts. On the face of it, a book about 80's films was going to be right up my street. As someone born in 1967, the 80's were a neon lit decade strutting down the street wearing huge shoulder pads and day-glo socks to a synth-drenched soundtrack. In other words, utterly brilliant. With the benefit of hindsight I can see that the 60's and 70's were both (probably) superior, certainly from a music point of view, but even though they were the garish years that started with the slick New Romanticism of Duran Duran and their ilk and slowly went downhill towards the worst decade ever (i.e. the 90's), the Eighties will always hold a special place in my heart. Music, film - everything seemed bigger, brighter... better!

So a book that told the stories of eighty of the films from the greatest decade (probably) ever. This was going to be great. We know it's going to be eighty films, because that's the title of the book: '80 from the 80's'. Hold that thought for a minute... The selection of titles on the cover was certainly promising: Wargames, The Sure Thing, The Lost Boys, Heathers... these were some of my favourite films. Seventy-six more like that? SIgn me up!

Then the book arrived and I started, as you do, with the introduction. At which point things started to unravel. The author, Lane Myer, explained that they had, for ten years, written a weekly Box Office report. They didn't actually specify who or what this report was for - might have been essential reading in an industry publication, might have been written in green crayon in a pile of exercise books. They do appear to be available as  Box Office: The Collected U.S Box Office Reports 2004 - 2014  in a Kindle edition, so we'll give him (I'm assuming it's a 'him', Lane is quite an ambiguous name) the benefit of the doubt. Anyway, when he stopped writing these reports he had a writing and film itch that needed scratching, and so, via a slightly convoluted route, decided to write a series of essays on films from the 80's, documenting their story from inception, through production and on to release. Along the way, each essay would look at the writers, actors and directors involved and then how the film ultimately performed against budget when it was put in front of the movie going public.

The early essays were received well, we are told (but again, we're not told where they were published - I'm going out on a limb here and saying it was probably a personal blog), but it soon became apparent to Myer that producing these essays, while holding down a full time job, was hard work.

So after an unspecified period of time, he decided that it was going to be too much work, and although he clearly still liked the title '80 from the 80's', he decided to just publish twenty.

So what we have here is a collection of twenty essays about 80's films, but in order to fulfil the audience's expectation of, y'know, 80 films, he has tagged on a short 'If you liked this, you may like these' page to each essay, consisting of a paragraph or two covering three other films of a similar genre.

So not so much '80 from the 80's' as '20 from the 80's with a little bit tacked on about 60 others'. Which, I'm sure you'll agree, is not such a snappy title. In addition, as you make your way through the book you will soon notice that a) it has no page numbers, and b) some of the formatting is woefully unprofessional, as a title will start on the last line of a page and the text will start at the top of the next. This says to me that it's basically been cut 'n' pasted from a blog with the bare minimum of editing (a few spelling mistakes have managed to creep through too). Interestingly, the only information in the book, other than the main text, is a credit for the cover photo (good work, Nicole O'Brien), a proofreading credit (not such good work, Thushan Kumaraswamy), and a note in the back that the book was 'Printed in Great Britain by Amazon'. All of which screams 'vanity project'.

So thus far I've been quite critical - what of the actual content? Well actually it's pretty good. It does on occasion feel like you're reading a Wikipedia entry (and the author readily acknowledges that the online encyclopaedia was one of his main sources of information), and the quality and length of entries varies quite a bit. I guess some films were easier to research than others. But for the most part the essays were interesting, in most cases threw up tidbits of information that I wasn't previously aware of, and never descended into boring technical detail. Lane has also chosen an eclectic selection of films to write about, eschewing (for the most part) the huge blockbusters that have been written about to the nth degree, picking instead some you may be aware of, but might have passed you by.

It's interesting to look back and see how films performed at the time - Heathers, a film that pretty much defined the 80's for me and which I thought had been a great success barely made back a third of it's modest $3m budget. Contrast that with Police Academy, which I thought was...okay. That made out like gangbusters! No accounting for public taste, right?

So the upshot is, if you're prepared to put up with some amateurish formatting (and to invest in a bookmark) it's actually an enjoyable book, and if you've any interest in 80's film at all, you'll find much to draw you in.

The biggest problem you may have is that like me, you'll finish the book with a shopping list of 20 or 30 DVDs that you need to buy to either catch up on films that slipped through the net at the time, or the ones that you think "I haven't see that in ages!"

Mr J Thompson
5.0 out of 5 stars A classic collection of essays on 80 of the classic films of the 80s
Reviewed in the United Kingdom on 4 March 2016
Verified Purchase
Lane Myer used to write a weekly box-office report for a well-known online community, utilising brilliant collation, insights and inside information to construct a must-read on a weekly basis. When those reports stopped I was bereft, they were a genuine fascination on a industry of which I was a mere consumer.

This new endeavour has been long in the making and having been privileged to have access to the online pre-publication digests I can honestly say I have been looking forward to when I could purchase this collection.

Anyone who grew up through the 1980s cinema resurgence will be able to pick and read this with warm nostalgia, whereas others with any interest in film history will find many interesting tidbits, anecdotes, fact and figures on some of the most classic movies of the period to consume, all of which Lane has professionally collected and analysed for the readers pleasure. This comes highly recommended.
Read more
5 people found this helpful
Report abuse

D. M. Brown
5.0 out of 5 stars The story behind the stories
Reviewed in the United Kingdom on 3 March 2016
Verified Purchase
Wow! What a book. Anyone with an interest in cinema should check this out. It has excellent, well researched write-ups on a variety of films from the 80s. Not always the biggest films, but always the ones with the most interesting back stories. Excellent, well worth the money
Read more
7 people found this helpful
Report abuse

NeilJames
5.0 out of 5 stars Listen... Can You Smell Something?
Reviewed in the United Kingdom on 17 June 2017
Verified Purchase
Great piece of nostalgia from someone who obviously loves the period. Very cool.
Read more
2 people found this helpful
Report abuse

Emma
5.0 out of 5 stars Five Stars
Reviewed in the United Kingdom on 4 March 2016
Verified Purchase
Fabulous book. Well worth a read.
Read more
2 people found this helpful
Report abuse
See all reviews
Back to top
Get to Know Us
Make Money with Us
Let Us Help You
And don't forget:
© 1996-2021, Amazon.com, Inc. or its affiliates