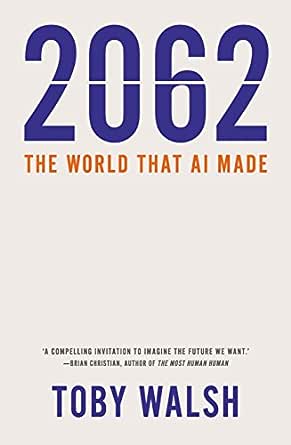 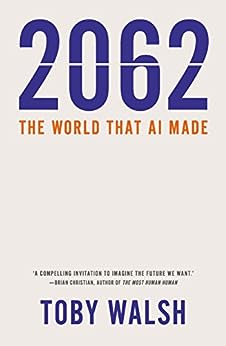 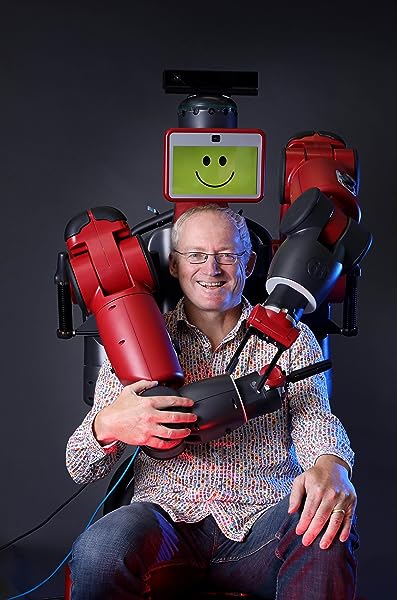 2062: The World that AI Made Kindle Edition

Toby Walsh is a world-leader in the field of artificial intelligence, and has spent his life dreaming about machines that might think. He is a Professor of AI at the University of New South Wales and leads a research group at Data61, Australia's Centre of Excellence for ICT Research. Toby is a regular contributor to American Scientist, New Scientist and the Conversation. --This text refers to the paperback edition.

What does a world of smart machines actually look like? AI expert Toby Walsh predicts the state of work, war, politics, economics, everyday life and death in the not-too-distant future, when we will live with machines as intelligent as us. --This text refers to the paperback edition.

Kindle Customer
3.0 out of 5 stars thought Provoking
Reviewed in Australia on 13 November 2018
Verified Purchase
A wide ranging examination of the ways that AI and its related technologies may change our world. And not necessarily for the better if we don’t handle it correctly.
Read more
Helpful
Comment Report abuse
See all reviews from Australia

Mal Warwick
4.0 out of 5 stars A well-balanced view free of hyperbole and alarmism
Reviewed in the United States on 21 February 2019
Verified Purchase
"I believe that one day we will create machines that think," writes AI researcher Toby Walsh in his new book, 2062. "We will invent machines that are superior to us. They will be stronger, faster and more intelligent than us." However, he notes, they will think in ways very different from us. "A faster-thinking dog will likely still be a dog. It will still dream of chasing squirrels and sticks." Which is to say that machines that think will understand the world around them in a fashion alien to human beings.

Whether or not machines ever achieve consciousness, they will never be human. And should we be frightened? This AI expert worries that much could go wrong as artificial intelligence comes to play an ever-larger role in our lives.

AI is "already starting to damage society"
Walsh notes that "this book is a warning about the multiple real dangers posed by AI, many of which are already starting to damage society. Most of them require only the stupid AI we have today, and not the smart AI we will likely have in fifty or 100 years' time." It's highly unlikely robots will ever exterminate the human race, as some seem to suggest. Instead, Walsh writes about such dangers as these:

** error-prone military drones that are 90 percent inaccurate even with human supervision;
** the total loss of privacy from ever-more-intrusive data collection by machines;
** the human bias in law enforcement software because the data it's based is the result of historic discrimination against women and African-Americans;
** the increasing loss of jobs as automation continues to make inroads in high-powered professions; and
** the extreme economic inequality that comes from the growing concentration of wealth in large tech companies.

This AI expert worries about the future but puts his fears in perspective
To put these worries in perspective, Walsh does not share the fears so famously attributed to Elon Musk, computer scientists Bill Joy and Jaron Lanier, and the late Stephen Hawking. He rates the odds that robots will eliminate the human race as virtually nil. Walsh backs up his views with the detailed reasoning that led him to that conclusion. And he's far from alone in taking this stance. "A survey of fifty Nobel laureates conducted in September 2017 by Times Higher Education ranked the climate, population rise, nuclear war, disease, selfishness, ignorance, terrorism, fundamentalism and Donald Trump as bigger threats to humanity than AI."

There will be no technological singularity
The title of Walsh's book is significant. He polled 500 artificial intelligence professionals, asking when computers' intelligence might be expected to match humans'. "For a 90 percent probability . . . the median prediction of the experts was 2112." 2062 represents the year when the experts judged the probability that machines would become as smart as humans was 50 percent.

However, as you may be aware, the Google computer scientist Ray Kurzweil has been predicting for many years that machines will not just be as smart as humans by 2045, but they will also have gained the potential to learn at an exponentially faster rate and thus far outstrip homo sapiens. Kurzweil calls this the technological singularity. Toby Walsh is profoundly skeptical about this claim. He spells out no fewer than ten reasons why the singularity is not inevitable. Like many other AI professionals, he is not even certain that computers will ever become more than human.

** For example, he is dubious about one of the recurring tropes in science fiction: brain implants. Walsh writes that "interfacing your brain to a machine is only likely to slow down the machine."
He is even more skeptical about the prospect for uploading our consciousness to a machine and thus achieve immortality (as a few wealthy men in Silicon Valley hope to do). "It might be impossible or impractical to read the contents of our biological brains accurately enough to make a digital copy." And how, he asks, do we know that the very act of attempting to do so won't damage the brain?
** And Walsh explains that the common expectation that robots will take all our jobs may be based on faulty assumptions. "We have no real idea about the number of jobs at risk; there are just too many uncertainties." Certainly, most truck, taxi, and Uber drivers may be out of work even in the near future. But those who predict that low-paid jobs in general are at risk of automation are ignoring a simple fact: it may not be "economically viable to automate them." In any case, in the past, new technology has tended to create more jobs, not fewer. So, "no one can say what the net effect on employment will be."

Like so many of his colleagues, this AI expert worries about the growing impact of artificial intelligence on our lives. But he insists that "The AI Revolution . . . will be about rediscovering the things that make us human."

About the author
British transplant Toby Walsh is a professor of artificial intelligence at Australia's University of New South Wales. He is an international leader in the effort by AI professionals to press for policies worldwide to minimize the potential harm from the work in his field. 2062 is the fourth of his books on artificial intelligence. As one of the world's leading AI researchers, he has also authored a prodigious number of academic papers.

LivC
5.0 out of 5 stars A must read for every human
Reviewed in the United States on 6 May 2019
Verified Purchase
If you ever want a summary of where humanity is at from the perspective of AI, this is the book to read. Easy to understand and once you understand it, you can feel the fear of potentially what’s ahead.
Read more
Helpful
Sending feedback...
Thank you for your feedback.
Sorry, we failed to record your vote. Please try again
Report abuse