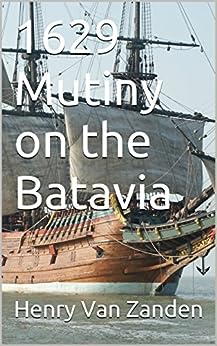 1629 Mutiny on the Batavia Kindle Edition

3.8 out of 5 stars
3.8 out of 5
3 global ratings
How are ratings calculated?
To calculate the overall star rating and percentage breakdown by star, we don’t use a simple average. Instead, our system considers things like how recent a review is and if the reviewer bought the item on Amazon. It also analyses reviews to verify trustworthiness.

Halasius Bradford
2.0 out of 5 stars This is a fictional version of the story
Reviewed in the United States on 29 July 2020
Verified Purchase
I've got very disappointed with this book. I am giving two stars, instead of just one, because it has plenty photos with links to sources on the internet.
But, the story in this book is an interpretation of the author.

If you want to know the REAL story (or the closest we can get to the real story) don't buy this book.
On the other hand, if you don't respect history and you'd rather read fiction, based on a magnificent real story that need absolutely nothing more than its real facts, so you'll like this book.
Read more
Report abuse

Amazon Customer
5.0 out of 5 stars Five Stars
Reviewed in the United States on 20 July 2016
Verified Purchase
Enjoyed the read very much. Henry is a great writer of historical events.
Read more
One person found this helpful
Report abuse
See all reviews
Back to top
Get to Know Us
Make Money with Us
Let Us Help You
And don't forget:
© 1996-2021, Amazon.com, Inc. or its affiliates