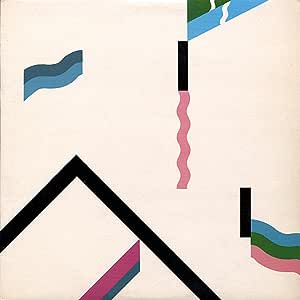 Digitally remastered edition of the British post-punk band's third album, originally released in 1979. 154 peaked at #39 in the UK Albums Chart, the highest position the band has achieved. The album is so named because the band had played 154 gigs in their career at the time of the album's release. Pitchfork listed 154 as 85th best album of the 1970s. Wire's first three albums need no introduction. They are the three classic albums on which Wire's reputation is based. Moreover, they are the recordings that minted the post-punk form. This was adopted by other bands, but Wire were there first. The digipack CDs have identical tracklistings to their vinyl counterparts. These versions should be considered Wire's classic 1970s albums, pure and undiluted.

Partial Mind
4.0 out of 5 stars Special edition (?)
Reviewed in the United Kingdom on 21 May 2018
Verified Purchase
Well it’s v nice - 7” Square book and 3cds...nice articles, lyrics (with a few boo boos) and photos...But no new recordings- the demos are same as “behind the curtain” from 1995. A great album for sure but for the committed or lucky 154 virgins (if you get my meaning).
Read more
7 people found this helpful
Helpful
Sending feedback...
Thank you for your feedback.
Sorry, we failed to record your vote. Please try again
Report abuse

Robert Pennie
4.0 out of 5 stars Definitely post punk this time.
Reviewed in the United Kingdom on 10 June 2018
Verified Purchase
Ok,this is the weaker of the three special edition re-releases just out.Not as punky as the other two,but it does have loads of great tracks.This also has various single releases and of course a full disc of demo tracks.Again,a superb package with pictures and lyrics and general album info.Though I don’t like the way the tracklisting of the three discs has been omitted from the book cover,being placed inside instead.The other two releases have them on the back cover.On the whole a great series of releases.I bought all three.
Read more
One person found this helpful
Helpful
Sending feedback...
Thank you for your feedback.
Sorry, we failed to record your vote. Please try again
Report abuse

Mick Kropotkin
5.0 out of 5 stars Beware of the Vinyl!
Reviewed in the United Kingdom on 4 July 2018
Verified Purchase
The album is a bone fide classic; no doubt about that. I bought the CD Box Set and the Vinyl. Both sound great but the remastered vinyl is let down by being poorly pressed . My copy suffered from horrendous crackling on A touching Display which rendered it unlistenable . I sent it back .....shame about the Pink Flag quality control
Read more
One person found this helpful
Helpful
Sending feedback...
Thank you for your feedback.
Sorry, we failed to record your vote. Please try again
Report abuse

Phil Reddy
4.0 out of 5 stars Pivotal
Reviewed in the United Kingdom on 20 April 2020
Verified Purchase
I purchased this on Amazon back when it only cost £9.98.

I am just getting around to reviewing it now, wow, how the price has shot up.

steve
5.0 out of 5 stars This 3rd Wire re-issue is superb. Great package.
Reviewed in the United Kingdom on 25 June 2018
Verified Purchase
Great package. Great band. A lot of thought has gone into this for Wire fans. Despite having a lot of the material there are a few surprises in there though.
Read more
Helpful
Sending feedback...
Thank you for your feedback.
Sorry, we failed to record your vote. Please try again
Report abuse
Load more international reviews

frazzle
5.0 out of 5 stars Ahead of its time
Reviewed in the United Kingdom on 15 January 2014
Verified Purchase
I think this album was ahead of its time, and still is! So no problem in giving it five stars.
Read more
One person found this helpful
Helpful
Sending feedback...
Thank you for your feedback.
Sorry, we failed to record your vote. Please try again
Report abuse

Jason Parkes
5.0 out of 5 stars The end of Harvest-era & post-punk masterpiece
Reviewed in the United Kingdom on 14 February 2006
Verified Purchase
The philosophy of 1978's 'I am the Fly' which dismissed punk and cast Wire as punk-spirited outsiders in a blurred French Film of their own was carried on into the great 'Chairs Missing' LP. Late 1978 saw the band shift again, the effect of touring and travel excerting an influence over the material - which came in various origins - Lewis writing on his own, Gilbert writing on his own, Newman writing on his own...and the odd collaboration between members (the e.p. included with this album and on later reissues is effectively solo-work from each member).The band seem at odds with each other at odds with the world - so it was unsurprising they would disintegrate following the 'Document + Eyewitness' performance, resurfacing as a different (but same spirited) Wire on Mute-records in the mid-1980s. '154' was the conclusion of their years on a major label and another obligatory purchase.
'154' remains for me their most complete LP, as great as many albums of this era - 'Unknown Pleasures', 'Metal Box', 'Cut', 'Secondhand Daylight','Entertainment!','Fear of Music', 'Dub Housing', 'The Only Fun in Town', 'The Scream' etc. Lewis' opener 'I Should Have Known Better' is a different kind of angular pop, a building melancholy reflected in the manic-guitars towards its climax. & it even uses the word 'albeit'! There are kind of pop songs here - 'The 15th' still sounds terminally sublime and was later covered by proto-Scissor-Sisters outfit Fischerspooner (essentially Sigue Sigue Sputnik with a smaller budget and a bit more taste) while 'Map Ref 41 N 93 W' (title!) is essentially catchy - setting the precedent for things like 'Eardrum Buzz' and 'Not Me'. Sadly it never became a hit when the record label opted to put their money behind reductive Japan-tribute outfit Duran Duran!
There's an abiding melancholy here - B.C. Gilbert's 'Blessed State' an anti-National Anthem that always sounds pertinent with its refrain "oh what a perfect, what a well-made world." 'Two People in a Room' shows the angry punk thing wasn't completely erased - while 'A Mutal Friend' explores more oblique territories. 'The Other Window' is the missing link between Eno and hip-hop, opening as an ambient-guitar dirge with vocals from Gilbert, oblique chatter that becomes something else when an electro-beat kicks in! Newman's 'On Returning' is poppier, slight-pop not far from Talking Heads and some of the material found on his solo LP 'A/Z'. My two favourite tracks remain closer '40 Versions' which is Gilbert's guitar-dominated ode to entropic options ('total eclipse and Niagra falls'!) - the guitar itself is brilliant and could be cited as the birth of Interpol's career! Lyrically it feels somewhat sci-fi, reflected in the artwork the albums Wire released on Harvest and the feel of '154.' The epic 'A Touching Display' remains the other favourite, even longer than 1978's 'Mercy', Lewis' offers something that lyrically recalls (predicts to be accurate) Julian Cope's bombed-out state ('Wilder' to 'Fried') with music that sounds like Young Marble Giants playing Siouxsie & the Banshees. I love the way the vocals become more passionate, and then nothing - words not required anymore and the band drift off into drones and avant-solos. Math-rock could be argued to have stemmed from here, as well as things like Theoretical Girls and Slint then!
'154' is a great album, the Harvest-trio is deservedly reissued - though I think the later/contemporary Wire-product should be celebrated, as well as material on Newman's Swim Label and various members releases as Colin Newman, He Said, A.C. Marias, and Wir. Highlight reissues of 2006 and records that may not have made much sense at the time, but more than work now.
Read more
28 people found this helpful
Helpful
Sending feedback...
Thank you for your feedback.
Sorry, we failed to record your vote. Please try again
Report abuse

gar
5.0 out of 5 stars wire 154
Reviewed in the United Kingdom on 3 January 2011
Verified Purchase
I think everyone sould know about wire I started from the start with pink flag people I had spoken to who were in to the post punk stuff like myself said this was the album they had and sould get.I did not really get it at first but then I did start to get in to it.I really wanted to hear more so I moved on to chairs missing and liked outdoor miner and I am the fly.But in my humble opion the best was yet to come when I got 154 from I sould have known better to The 15th its a great album buy it.
Read more
2 people found this helpful
Helpful
Sending feedback...
Thank you for your feedback.
Sorry, we failed to record your vote. Please try again
Report abuse