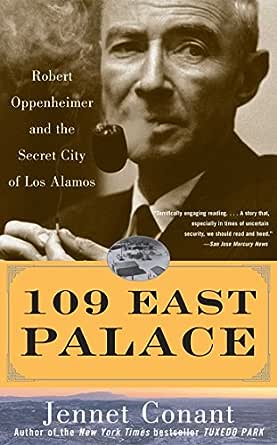 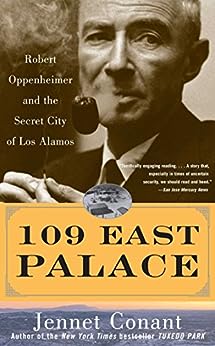 "The Manhattan Project was a chapter of history rich in the drama of human strengths and frailties, as Jennet Conant chronicles in her illuminating 109 East Palace.... Yet, for all the doubts and hardships, the scientists and workers at Los Alamos were part of something extraordinary.... Thanks to Conant's vivid book, we understand why."
-- BusinessWeek

"Terrifically engaging reading.... A story that, especially in times of uncertain security, we should read and heed."
-- San Jose Mercury News

"A unique and interesting portrait of the development of the atomic bomb and the brilliant man who oversaw the process.... Conant gives the reader one story after another, revealing the humanity of these people within the framework of the project that ushered the world into the Atomic Age.... Highly readable."
-- San Antonio Express-News

"Bears the weight of inexorable drama.... Excels in showing how bedeviled the brilliant, oddly spineless but extraordinarily powerful Oppenheimer was."
-- St. Petersburg Times

"A spellbinding account of a venture that often teetered on the brink while the future of the world lay at stake.... Vividly told, the interplay of personalities that would ultimately transform the world."
-- Kirkus Reviews (starred)

"More than any other account of Los Alamos that I've read, Conant's narrative evokes the texture of life there.... A well-told narrative of daily life in a top-secret operation."
-- Newsday

"An engaging portrait of life on the remote mesa that served as backdrop for the world's most audacious scientific enterprise.... Conant packs her book with colorful, little-known details that bring the quotidian side of the bomb-building effort to life."
-- Baltimore Sun --This text refers to an alternate kindle_edition edition.

Jennet Conant's profiles have appeared in Vanity Fair, Esquire, GQ, Newsweek, and The New York Times. She was given unrestricted access to Loomis' and Conant's papers, as well as to previously unpublished letters and documents, and she interviewed Loomis' many family members, friends, and colleagues. The granddaughter and grand niece of two of the scientists from the Tuxedo Park community, she is a graduate of Bryn Mawr College and Columbia University's School of Journalism. She lives in New York City and Sag Harbor with her husband, "60 Minutes" correspondent Steve Kroft, and their son. --This text refers to an out of print or unavailable edition of this title.

4.5 out of 5 stars
4.5 out of 5
314 global ratings
How are ratings calculated?
To calculate the overall star rating and percentage breakdown by star, we don’t use a simple average. Instead, our system considers things like how recent a review is and if the reviewer bought the item on Amazon. It also analyses reviews to verify trustworthiness.

kindler
5.0 out of 5 stars Humanizing History
Reviewed in the United Kingdom on 29 July 2012
Verified Purchase
A brilliant account of the Manhattan Project, the development of the atomic bomb, and its key players and after-effects. I have sampled many books on this subject, varying from very factual accounts of the science and politics to very personalised memoirs and biographies. This is the only book so far on the subject that I have managed to read all the way to the end without skipping anything. I wouldn't hesitate to recommend this book to anyone with an interest in the subject.

It is very easy to follow, even for those who know little about the history, and it presents the story and the facts and the people in a very human way. By the end of the book, which ends with the last days of several of the key players, I was left feeling like I knew these people, touched by their passing and taking a moment to pause and consider their lives and work and how everything came together to form what is now regarded as one of the most tragic offences in military history, a unique episode in our semi-recent past. I did find myself having several of those "what if?" moments where you consider how one minor detail being different could literally have changed the course of history on a worldwide scale. This is particularly true of Dorothy's part in the project and it is fascinating to see this civilian/military endeavour described almost first hand.

Having already been familiar with the basic facts from history lessons, I found myself appreciating what I already knew on a much more personal level and in a much more detailed and 'real' way - thinking about these big historical events in everyday terms is often difficult and most people tend to retain only important dates and one-line biographies, rather than an accurate overall picture. Reading the book, I felt drawn into a truly unique society that was formed nearly 70 years ago now, but feels somehow recent - it wasn't within my lifetime but it is within living memory and it feels like a modern tale that you can relate to in a way that you may never be able to relate to something that happened prior to the industrial revolution or in ancient Greece.

It summarises a lot of content into a readable, simple story peppered with quotations from those involved and snippets of contemporary letters and memos. The foreword includes a quote from the author's grandfather and administrator of the Manhattan Project, James Conant, which sums up the book in many ways: "They won't believe you, when the time comess that this can be told. It is more fantastic than Jules Verne."

With 109 East Palace, Jennet Conant takes a story which is in many ways fantastic and unbelievable, and makes it seem as realistic as it actually was, fascinating and compelling, a reminder of an amazing human achievement with a greater impact upon the world than the key individuals perhaps realised at the time. Ethical and moral questions abound and you can summon up some amount of empathy for everyone described in the book. That is what makes this book, in my opinion, very well written.

That said, my inner grammar Nazi was dismayed and disappointed to find that there is not a single possessive apostrophe in this entire book. It is absolutely full of references to "Oppenheimers hat" and "Morrisons wife" and there are absolutely no apostrophes on the horizon. There are also a few missing words here and there and some maybe-typo-maybe-mistake issues (slight for sleight, an incorrect use of a 'sic'). The author being a journalist and professional writer, and the book presumably having been proof read and edited, this astounded me. It was only a mild annoyance to be honest and it didn't hamper my understanding or enjoyment to any great extent, but worth noting nonetheless. Hopefully these errors will be corrected in future editions if this is pointed out.

It also survives the Kindle test - it is well laid out and not riddled with typographical and spacing problems. The black and white pictures at the end lend themselves well to this format and all of the indexing and footnotes are really well executed and without bugs.

G Taylor
3.0 out of 5 stars Far too long
Reviewed in the United Kingdom on 22 February 2014
Verified Purchase
I read this book because it was on the Book Club list. I cannot pretend a serious interest in the subject, however some of this book was extremely interesting and informative. Far too much of it was devoted to background material, with only passing reference to really fascinating items. I felt the writer had included every single fact available. I actually skipped quite a large portion to get to the point of the book, and then read the rest later when I was better able to recognise the context.
Read more
Report abuse

Janet Crampton
1.0 out of 5 stars The book that had to be written
Reviewed in the United Kingdom on 26 April 2014
Verified Purchase
.... but you have to wonder why? There is a relationship between the author and one of the people involved in the Los Alamos project and she has thrown in just about every fact that she could lay her hands on (and an awful lot of stuff that must surely only be conjecture)? This is a fascinating episode in American history. Some very heavy editing would have made this a more compelling read.
Read more
Report abuse

D Pearson
1.0 out of 5 stars A terrible boring Read
Reviewed in the United Kingdom on 7 March 2014
Verified Purchase
It is a long, overlong, tale of the physicists who took part in one of the most important developments ever and all she writes about is some of the people, not characters, on the periphery! Reminded me of the old "Readers Digest" condensed books. but this not condensed enough!
Read more
Report abuse