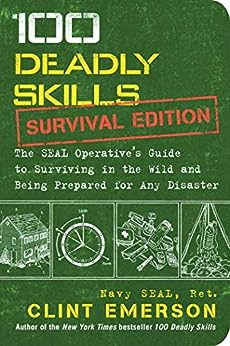 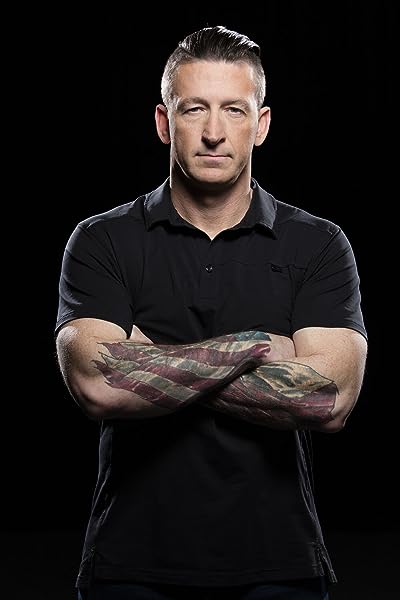 100 Deadly Skills: Survival Edition: The SEAL Operative's Guide to Surviving in the Wild and Being Prepared for Any Disaster Kindle Edition

by Clint Emerson (Author) Format: Kindle Edition
See all formats and editions
Sorry, there was a problem loading this page. Try again.
From national bestselling author and retired Navy SEAL Clint Emerson comes the essential guide for surviving today’s emergencies—from navigating in the wild to staying alive in any disaster.

These 100 skills, adapted for civilians from actual field experiences of special forces operations, offer a complete hands-on and practical guide to help you survive in the wild no matter the climate or terrain; be prepared for any crisis; and have the critical life-saving knowledge for staying safe in any hostile environment or disaster.

Yesterday’s survival guide is no longer relevant. 100 Deadly Skills: Survival Edition is what you need for today’s world, combining survival hacks developed on the battlefield with the low-tech tools you have on hand. This book is your essential prep manual, from securing shelter, building fire, finding food, and navigating back to civilization no matter the environment to thinking like a special forces solider so that you can survive a hostage situation, an active shooter, a suicide bomber, or a terrorist threat on the subway, and even apply trauma medicine as a first responder.

Full of specific scenarios to help you get in the mindset of survival, 100 Deadly Skills: Survival Edition is better than a Swiss Army knife whether you’re lost at sea, forced to land a plane, fighting off a bear, or deciding whether to run, hide, or fight. Next to each skill are easy-to-grasp detailed illustrations, because when you need to survive the apocalypse, you don’t have time for complicated instructions.
Read more
Previous page
Next page
Due to its large file size, this book may take longer to download

Clint Emerson is a recently retired Navy SEAL with twenty years of service with the Special Operations community. He spent his military career serving under various Naval Special Warfare Commands as a Special Operator (SEAL). Emerson is the founder of Escape the Wolf, LLC, which focuses on crisis management for global companies both small and large. He’s the bestselling author of 100 Deadly Skills and 100 Deadly Skills: Survival Edition, and also the only SEAL ever inducted into the International Spy Museum. --This text refers to the paperback edition.

Clint Emerson grew up in Saudi Arabia, where his father was an engineer for the state oil company Saudi Aramco. He attended high school in North Dallas and enlisted in the Navy in 1994, serving as a SEAL operator at SEAL Team Three, the NSA, and SEAL Team Six, before retiring in 2015. Now 46 years old, he runs a crisis-management company, Escape the Wolf, based in Frisco, Texas. For more about Clint, check out clintemerson.com

4.7 out of 5 stars
4.7 out of 5
3,320 global ratings
How are ratings calculated?
To calculate the overall star rating and percentage breakdown by star, we don’t use a simple average. Instead, our system considers things like how recent a review is and if the reviewer bought the item on Amazon. It also analyses reviews to verify trustworthiness.

Mickeytee
2.0 out of 5 stars Mostly Disappointing
Reviewed in Australia on 24 February 2020
Verified Purchase
It's really hard to tell if this book is serious or a joke sometimes. Some of the things in this are so useless and absurd it's a waste of paper... I'm sure there is some solid gold in this book so I'll hang onto it for a bit... But probably better to get a serious one like the SAS Survival Guide.
Read more
Helpful
Report abuse

Matt
5.0 out of 5 stars Very informative, clear & visual!
Reviewed in Australia on 5 February 2020
Verified Purchase
This book is very informative, its clearly written and uses sketches/drawings to illustrate what it's saying. This book is definitely a must for anyone who liked the original 100 Deadly Skills. Highly recommended!
Read more
Helpful
Report abuse

Amazon Customer
5.0 out of 5 stars Some things a Survivalist should know
Reviewed in the United Kingdom on 11 September 2020
Verified Purchase
If you are one of those people that call themselves survivalists. This book should be in your library. you should also add the Survivalist edition. The Seals used to train quite near to where I live in Scotland.
Read more
One person found this helpful
Report abuse

Bells
5.0 out of 5 stars What a brilliant book!
Reviewed in the United Kingdom on 23 November 2017
Verified Purchase
What a brilliant book!! This is a great gift idea for anyone who loves the great outdoors and adventure. Of course you're not very likely to need to know many of the skills in this book but you never know.. !?
It's really interesting and has a whole host of random survival situations, from how to collect water in a rainforest to how to survive a stampede. Even if you never venture further than the next town, I'd highly recommend this book.
Read more
3 people found this helpful
Report abuse

Madz
5.0 out of 5 stars Very good
Reviewed in the United Kingdom on 17 October 2019
Verified Purchase
Very insightful and really makes you think more about your safety and others around you some very extreme cases written about but it does make one think to be better prepared
Read more
3 people found this helpful
Report abuse

N. Sheridan
5.0 out of 5 stars One day you too could need these skills
Reviewed in the United Kingdom on 3 June 2017
Verified Purchase
Just finished reading this. Most of the skills are transferable to the civilian world, if you learn one thing that comes in useful it was worth the cover price. The picture are some times hard to decipher but other than that it makes an interesting read.
Read more
4 people found this helpful
Report abuse
See all reviews
Back to top
Get to Know Us
Make Money with Us
Let Us Help You
And don't forget:
© 1996-2021, Amazon.com, Inc. or its affiliates